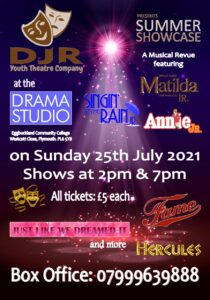 UPDATE: DJR have recently returned after 14 months with the new name DJR YOUTH THEATRE COMPANY
for children aged 7 to 14 years of age. Fees are now £45 per term. New members are welcome to join the group which celebrated its 10th anniversary last year. DJR have a new rehearsal day which is Tuesdays from 4.30pm to 6.30pm at the Drama Studio of Eggbuckland Community College. Come along for a taster session.

DJR Youth Theatre Company will be resuming rehearsals after a year away!

Due to Covid 19, the company was unable to celebrate its 10th anniversary last year. After the recent government announcement they are planning to return on Wednesday 21st April at Eggbuckland Community School’s Drama studio from 4.30pm to 6.30pm.

With a few changes DJR would like to recruit new members (actors/singers/dancers) to join the company who are aged 7 to 14 years of age. The summer term fees will be £45 per child. For further details contact the phone numbers on the flyer or email David Bailey on dbaileydjr@yahoo.co.uk 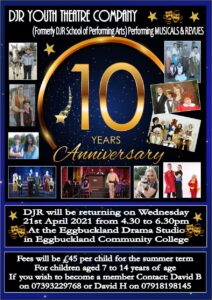