Sounds Musical Theatre Company perform a musical revue of colour themed songs with an enjoyable mix of musicals, pop songs and classics. They were accompanied throughout the performance by skilful musicians Anne Kalas and Rex King playing piano and drums.

Throughout the performance the harmonies were excellent. In particular the full company harmonies in ‘Treasure Waltz’ sounded delightful.

The transitions between songs were smooth and helped create a loose story. Karen Lambert, Director, singing ‘Don’t it make my Brown Eyes Blue’ was cheered up by the men who sang ‘Red Roses for a Blue Lady.’ In this song the harmonies in the male voices were exquisite.

Gordon Cook sang ‘She Wears Red Feathers’ with good enunciation, while the lady in question (Amanda Paddison) peeked out from the wings and from in between cast members, before showing off her ‘huly-huly skirt’ to great comedic effect.

Amanda also used her comedy skills alongside Leigh Jarman for ‘You’re a pink toothbrush’. The colourful Mohican wigs were fantastic and the characterisation by the duo was hilarious.

There were some excellent solos. Natasha Clarke sang ‘Primrose’ and Holli Littlefair sang ‘Quiet’, both had pure, pleasing voices. Experienced singer and Musical Director, Jenny George, sang ‘Rusalka’s Song to the Moon’ and Edward Gigg’s rich tone suited a ‘Wonderful World’. Annie Worth sang ‘Look to the Rainbow’, a charming and upbeat song. The soloist’s performance was enchanting however it would have been nice if she had an on-stage audience to interact with.

The dancers created a charming narrative to ’99 Red Balloons’ and achieved a smooth transition from a duet, performed by Claire Paddison and Jenna Squires, to an ensemble as the tempo increased. The duo performed a moving end to the song, featuring a red balloon.

Sounds Musical Theatre Company showed off their fantastic range of talent and gave us a teaser for their next show by ending on ‘Clambake’ from Carousel. 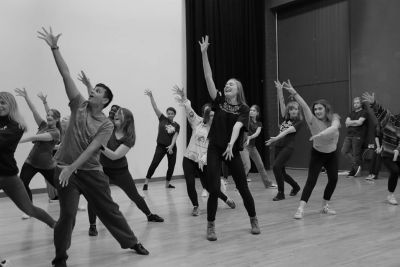 Robin Hood and the Babes in the Wood