Touchwood Theatre Company presents ‘Half A Sixpence’, a charming musical packed with toe tapping songs.
Matt Keast played Arthur Kipps, who narrated his own story about his rise to fortune. This began in his childhood, with him saying goodbye to his fellow orphan Ann. Young Arthur (Josh Jones) and Young Ann (Chloe Marlton) acted out what happened while older Arthur narrated. Matt’s acting was reminiscent of Tommy Steele’s version of Artie. He played a hilarious drunk and didn’t shy away from physical humour.

At his side, with her half a sixpence was Ann played by Hayley Pomeroy. They sang the title song with a sweet dance and good chemistry.

Harry Chitterlow played by Conor James was incredibly flamboyant in his mannerisms and speech. This character needed plenty of pizazz, being a playwright, which Conor unquestionably brought to this role.

Arthur Kipps began life as an apprentice in a shop along with Pearce (Joseph Thomas), Buggins (Sean Wills), Sid (Luke Allen Gdanitz), Kate (Lauren Gordon), Victoria (Heather Foulkes) and Flo (Lucie Barratt). These characters often sang in harmony. The sound they produced was pleasant and tuneful. They all moved well and had plenty of personality.

The production needed a little tidying up. The orchestra and cast could have been more enthusiastic and determined. Most of the cast members put in one hundred per cent which showed up those who were not quite as jolly.

The staging was diverse and made for swift scene changes. The half a sixpence’s either side of the stage were a good idea but for the more pedantic viewer it would have been nice if they did match.

On the whole, the audience seemed to enjoy Touchwood Theatre Company’s performance of ‘Half A Sixpence’. It has many memorable songs and is a feel-good musical. 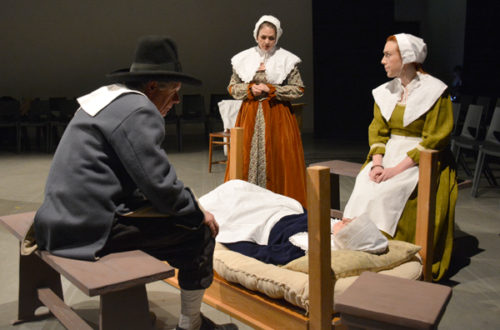