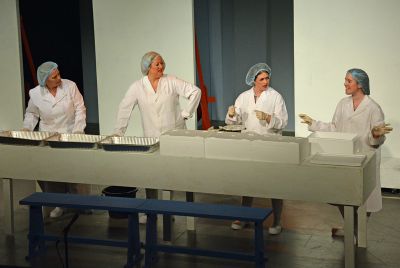 ‘Ladies Day’ follows the adventure of four ladies; Pearl (Ruth Thomas), Jan (Catherine Teague), Shelley (Nina Jarram) and Linda (Lianne Gore) who work in a fish filleting factory in Hull. They decide to leave the fish factory behind for a day to celebrate Pearl leaving the factory, by attending Royal Ascot’s Ladies Day.

While at the fish factory Pearl is discussing her retirement, ‘Me and Mick might take up amateur-dramatics’ to which Shelley replies ‘Oh you don’t want to do that.’ If only the characters knew how much fun the actors of this amateur-dramatic production were having!

The Tamaritans even created fun during scene transitions with a dance sequence in which the ladies changed from their bland factory clothes to posh Royal Ascot outfits, complete with picnic bag.

The comedic timing of Jan was spot on. Her line delivery never failed to produce a laugh from the audience. At Ascot she succumbs to the effects of drinking too much alcohol. While the other ladies are excitedly talking about the races, all she wants to do is curl up in bed.

The production of the play was carefully considered. The actors mimed the fish production line, using basic props to give a clear idea of what they were doing. The use of background noise for the factory machinery transported the audience straight into the setting.

The show had a laugh a minute but the serious moments gave a depth to the characters and their lives. The scene between Pearl and Barry (Jim Black) gave a stunning contrast to the antics of the girls. The audience were taken from laughing out loud to thoughtful silence.

The unlikely foursome rallied together for a memorable day at the races and a memorable performance for the audience.