The seniors of Plymkids Theatre Company present Legally Blonde The Musical, a fun filled evening that follows the story of Elle – a girl who is driven by love to apply for law school despite the world only seeing her as a typical blonde.

Talia Robens as Elle Woods has clearly been closely watching Reese Witherspoon in the film version of Legally Blonde. She has perfected the delivery of lines, and the audience especially loved all the times she proved herself to be an intelligent woman. This is Talia’s debut performance with Plymkids and she made the stage her own.

One of the biggest laughs of the evening went to Sam Fogg as Kyle, the delivery guy. He exuded confidence and added his own style of comedy into the role.

Elle is on the case to help prove the innocence of Brooke Wyndham (Rachel Corrigan). Brooke is the owner of a fitness empire and Rachel convinced me, she could have been too! She sang ‘Whipped Into Shape’ while performing a high-energy dance routine complete with skipping rope. Her voice did not falter as she proved she had the stamina to maintain this energetic performance.

This show includes two dogs, Bruiser and Rufus. Rufus the dog (Murphy) definitely took his moment in the spotlight, stealing the scene with a wag of his fluffy white tail.

This modern American musical has the dream combination of a heart-warming story and plenty of humour. For many members of the cast this will be their last show with Plymkids and I am sure they have made some amazing memories to take with them into the next stages of their careers. 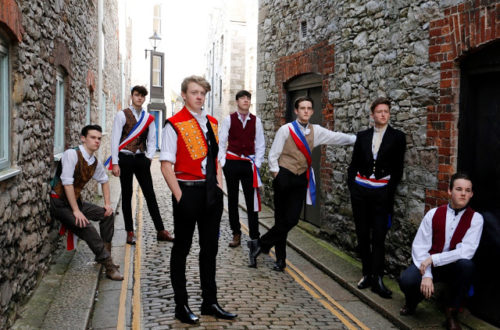