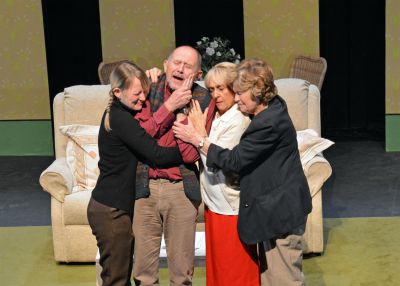 You know The Tamaritans? Them at The Drum Theatre, did that ‘Neighbourhood Watch’ thing. The Tamaritans performed Alan Ayckbourn’s funny and yet dark play about a neighbourhood watch. The play starts innocently with brother and sister, Martin (Richard Haighton) and Hilda (Debbie Temple) having a housewarming party. The first act is quite relatable with all the actors gossiping about ‘her at number 15’ and ‘the yobs on the estate’ but events turn quite dark when certain people start taking the neighbourhood watch too far.

Alan Aykbourn’s characters are recognisable from every neighbourhood. Joe Gore played Gareth Janner, a character who goes through inner turmoil over what to do about his unfaithful wife. Joe had clearly thought about the conflict within this character, as he excellently showed Gareth as a weeping mess one minute to a strong and determined man the next.

All involved played strong parts and it was interesting to see the diversity of characters within this neighbourhood. Some of the characters were not so sure of Magda (Katie Roberts) because she was an artistic type. The speech between the different types of people was excellent with subtle nods and disgusted looks for certain characters.

As is The Tamaritans trademark, the set was detailed and effective. Overall the play is set in Martin and Hilda’s front room. The Tamaritans also acted off the set, for example when in the garden one character would be looking out into the garden while the other could be heard shouting off stage. This was very well done and gave the audience an impression of the rest of the house.

Another crisp, funny performance from The Tamaritans. Their plays add diversity to the Plymouth amateur-dramatics scene and provides a great night out for the audience.