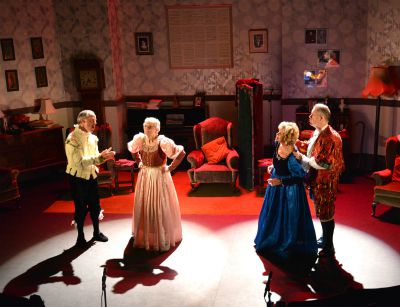 Many of you will have seen the film version of ‘Quartet’, featuring too many famous faces to count and whole host of retired musicians. In the Drum Theatre, The Tamaritans take us back to the roots of this story with the stage version.

The story is told in its original form and is taken back to a more classily understated performance. Featuring four characters, with mentions of many of the extra characters we see in the film, this play takes place in the Quartet members’ two favourite places – the terrace and the music room.

The arrival of Jean Horton causes a great upset in the country house due to her history with the other characters. Doreen Sutton played this part excellently. She put on the act of a tough and unbreakable spirit but also revealed Jean’s deepest sorrows in moving moments.

Reginald Paget is most ruffled by Jean’s arrival but also hilariously vent his anger towards Angelique, a member of staff, who will not give him marmalade for breakfast. Noel Preston-Jones as Reggie plays a more upbeat man than the version we see in the film. This refreshing characterisation leads you to see a man who is simply tired of drama and who finds pleasure in small things.

Reggie is quite the opposite of laugh-a-minute Wilfred Bond. Played by Clive Lovatt, Wilfred talks more explicitly and openly about his feelings and thoughts on old age. Underneath all his jokes towards Cissy it is clear to see he cares deeply for his lifelong friend. Clive played this aspect of the character beautifully.

Cissy played by Jenny Deakin is the ray of sunshine in the retirement home. She is bright and upbeat about all matters and finds excitement in small tasks.

The performers all worked together as if they had been performing as a quartet for years. The fiery arguments and warm reminiscing made the audience feel as if they were invited to watch the special bond rekindle between the four characters. The Tamaritans have a real eye for a good play and have produced another wonderful performance.