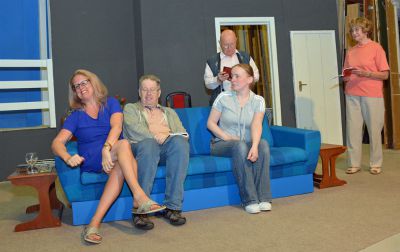 The Tamaritans brought us their classic recipe of comedy, charisma and characterisation. ‘Rumours’ is described as a side-splitting comedy and there was certainly audible raucous laughter for many of the scenes in this play. The farcical style of comedy is juxtaposed against the dark state of the situation.

This play is set at a dinner party. The guests arrive to find one of the hosts missing and the other with a bullet wound. The stage is set as a front room and hallway of a modern home with plenty of doors leading to the rest of the house. Neil Simon’s writing style requires the audience to use their imagination with the help of the actors as they disappear through the doors into other rooms and return to explain what is happening offstage. One thing after another goes wrong and the evening spirals out of control.

The Tamaritans are well-rehearsed in bringing us fantastically funny plays with slick delivery and excellent timing and this was no exception. Clive Lovatt as Len Cummings tells the other characters a story towards the end of the play. His delivery was faultless and he had the audience waiting for each sentence with anticipation. The crowd burst into well-deserved applause after he completed his tale.

Many of the characters have to shout during their dialogue. Every member achieved the perfect balance between raising their voice and keeping their diction clear. We felt their exasperation and fear and laughed as the curse words started creeping in.

The Tamaritans are true artists when it comes to performing comedy and The Drum Theatre is the perfect venue for performing a play. If you are looking for a relaxed night at the theatre then escape with ‘Rumours’.

Jack and the Beanstalk