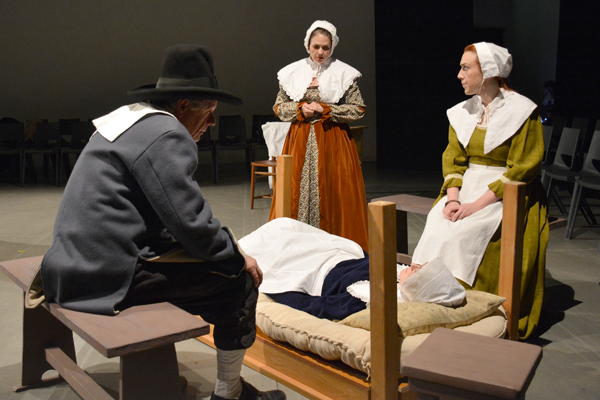 The Tamaritans present The Crucible. This famous play by Arthur Miller is widely studied in schools and explores themes of witchcraft in the 1600s.

The storytelling style of this play is fairly intense with plenty of scenes in which we see fear, desperation and anger from the actors. This high tension and talk of the devil gave an eerie feel to the theatre, to the point that you believed the young village girls were being tormented by evil spirits.

From the moment we entered the auditorium it was clear this was going to be an immersive experience. The seating was laid out in a square around the edges of the stage, allowing us to be close to the action. The actors moved in the shadows behind the audience to make their entrances. Paired with dim lighting, this added to the spooky sense of witchcraft.

Throughout most of the production this unusual layout worked excellently but at one point the view for myself and several other audience members was blocked by one or two of the actors. It may have been beneficial to have markers on the floor, especially in the corners to show the best places for the actors to stand to minimise obstructing the audience.

The range of characters in this play helped bring the village to life, as they argued about everything from land ownership to who danced with the devil.

In contrast to the good and noble John Procter (Gareth Davies) some of the characters seem more unsavoury. In particular, it is clear from the start that Rev Parris (Tony Giles) is a cause of some tension in the village. The skill of Tony’s acting meant that I felt a sincere dislike for the character. Likewise, Abigail Williams played by Katy Gamble left a bitter feeling as the cast questioned whether she was telling the truth.

The Tamaritans performance is a great engaging theatre experience and is definitely essential viewing for anyone studying this play.