Sounds Musical Theatre Company presents ‘The Pajama Game’. The story is set in a pyjama factory where the workers want a pay rise and boy meets girl spells trouble.

When Babe (Emily Lewis) challenges Sid (Adam Curtis) over an employee complaint, little do they know they will feel a spark. In the very relatable song ‘I’m Not At All In Love’ the factory girls tease Babe. This scene shows the friendship between the ladies and the dancing was fun. Babe showed off her excellent singing voice, ‘shouting’ above the gaggle of girls.

Hines played by Gordon Wearne was a great comedic character. The use of his voice and his comedic timing were spot on. The song ‘Think of The Time I Save’ was executed brilliantly, with great choreography and funny lines.

The Pajama Game unfortunately has few memorable songs. The cast was strong but the material was lacking.

The staging was excellent. It felt like a real factory and the walkway and steps added to the authentic feel. The scene in which Hines shows off his knife throwing act was cleverly done through the use of props, assuring Hines didn’t miss his target.

In Hernando’s hideaway, the atmosphere of a smoky café was set with wonderful Spanish dancing and a clever use of torches. The actors held the torches to their faces to create an intimate feel, as if they were sat at secluded tables rather than singing an ensemble number.

Sounds Musical Theatre Company told an amusing story, with great characters and a strong cast. The ensemble numbers were slick and every principal member played a strong part. 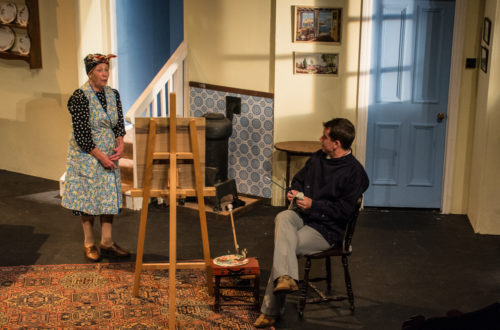